Read more about the importance of retainer wear 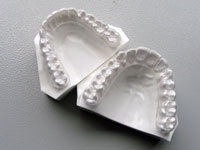 These retainers are the most commonly used after braces are removed. They are used to maintain treatment results and also help to prevent clenching and grinding at night because of the occlusal coverage they provide. They are invisible, easy to clean, and comfortable to wear. After braces are removed, the best way to ensure long-term stability of the teeth is indefinite retainer wear. All of our retainers are guaranteed for a 1 year period against normal wear and tear, although they generally last much longer. 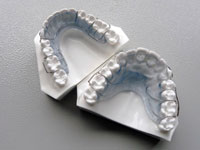 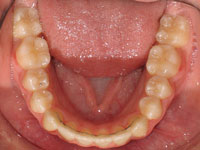 Bonded orthodontics retainers, also known as permanent or fixed retainers, are used when severe crowding has been treated. They can be used behind both the upper and lower front teeth so that they are invisible, and are very comfortable once gotten used to. The upper fixed retainer, known as a “bonded 1-1” in orthodontic terminology, is often used after closure of a large space between the two upper front teeth. The lower fixed retainer, known as a “bonded 3-3”, is often used after treating severe lower anterior crowding. In addition, we still recommend using removable clear retainers over all the teeth and fixed retainers to maintain the result of the posterior teeth.

Visit our Appliances page to learn more about common appliances used during retention.